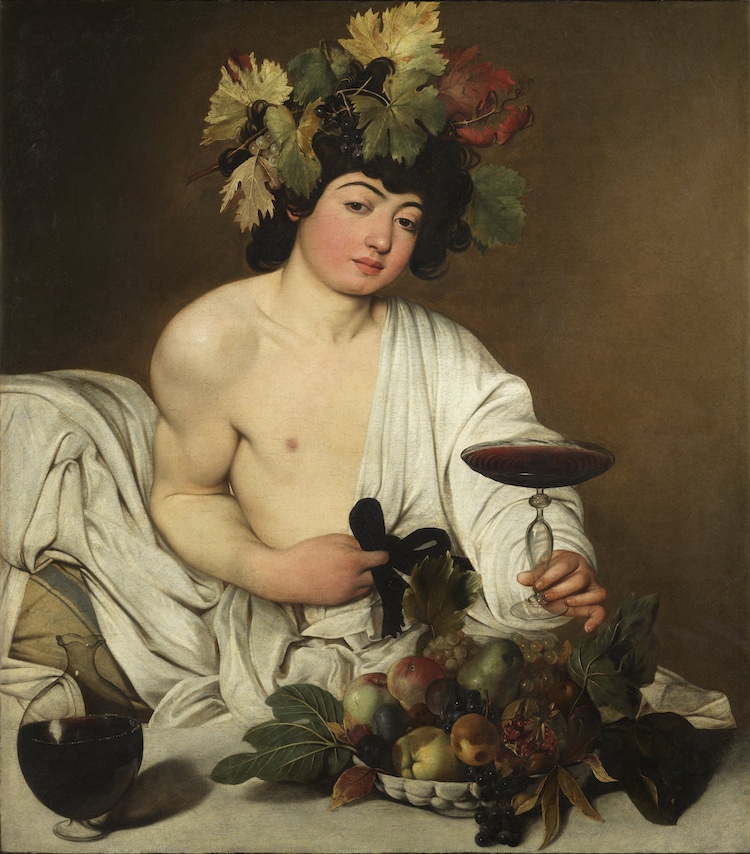 “Bacchus” by Caravaggio, c. 1595. (Photo: Public domain via Wikipedia)
This post may contain affiliate links. If you make a purchase, My Modern Met may earn an affiliate commission. Please read our disclosure for more info.

The story of Michelangelo Merisi—better known as Caravaggio—is one of talent and turbulence. The masterful Italian Baroque painter pushed boundaries, both in his artistic and personal life. As a man with a complicated personality, his work fell out of favor after his death in 1610 and only began to be appreciated by the public once again in the mid-20th century.

Born in Milan, Caravaggio made his way to Rome in his early 20s and became part of a circle of wealthy art patrons who would propel his career forward. In a time when figures in paintings were idealized, Caravaggio’s use of live models and his focus on realism was forward-thinking. His paintings relied on a high level of realism and masterful use of chiaroscuro to create unparalleled psychological drama. Unafraid to take risks, anyone involved in Caravaggio’s life could be transformed into an artwork. This included his student—and lover—Mario Minniti, who features in several paintings, including Bacchus, which is now on view at the Uffizi Gallery in Florence. In this piece, Minniti is dressed as the god of wine, embodying youth as he invites viewers into the party.

While pushing the boundaries might have scared others, Caravaggio was unwavering in his art. In fact, many of his paintings that were commissioned for Catholic churches were rejected by officials, as they did not conform to the aesthetic standard of the time. Luckily for him, Caravaggio always had a ready stable of collectors itching to scoop up any painting that he had to offer.

Biographers tend to focus heavily on Caravaggio’s temperamental behavior, which caused numerous fights and an eventual murder that saw him banished from Rome. But, artistically, Caravaggio is perhaps best known for his use of light and shadow. The high contrast of light and dark found in his paintings would influence later artists like Rembrandt and Peter Paul Rubens. An entire generation of painters (particularly in northern Europe) known as Caravaggisti was heavily inspired by his use of shadow. Let’s take a look at what makes Caravaggio and his art so groundbreaking by looking at some of his most thrilling paintings.

Learn more about Caravaggio and how his paintings, though controversial, broke new ground. 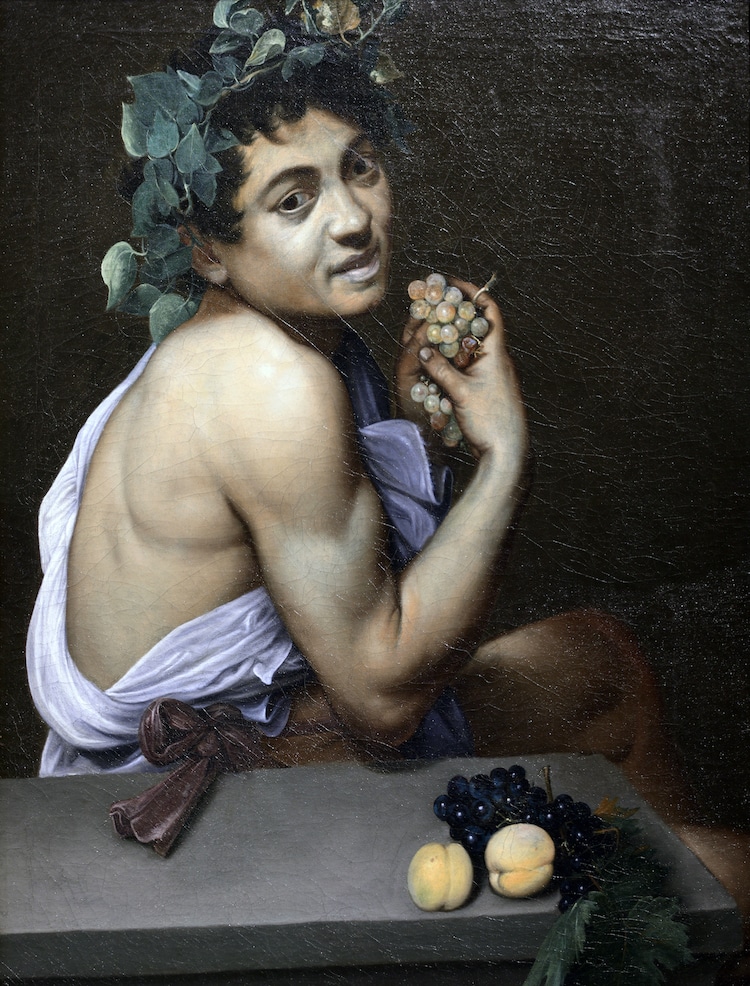 Bacchus, the mythological god of wine, was a common subject for painters, but no one had ever done it quite like Caravaggio. Painted when he’d first arrived in Rome, it’s actually a self-portrait. Known as the Sick Bacchus, Caravaggio does himself no favors in this rendering of himself. Already he’s demonstrating his quest for realism, even when the results can be unpleasant.

With sallow skin, Caravaggio’s Bacchus isn’t pretty. But, as is typical with the Baroque painter, Caravaggio wasn’t interested in the ideal. The oil painting, done for an early patron of his work, was a sort of visual business card that showed off his ability to create still life, as well as classical subjects in complex poses. 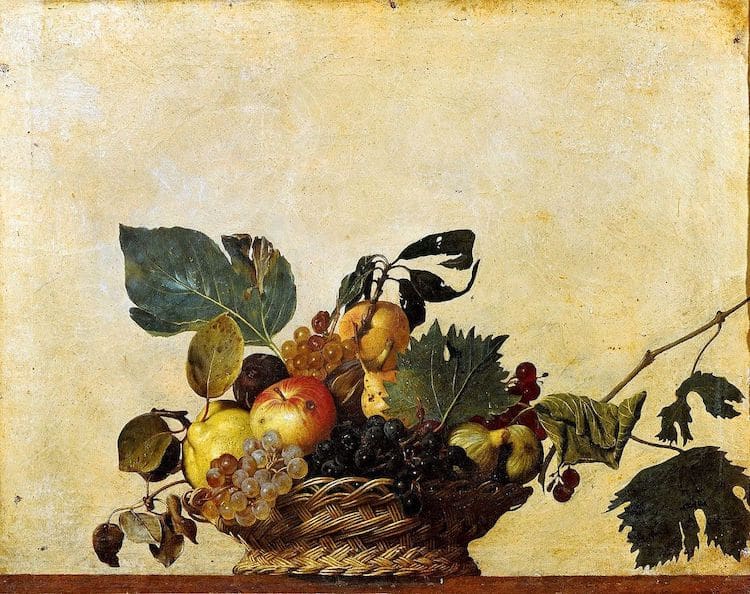 What’s so revolutionary about a basket of fruit? In the case of Caravaggio’s Basket of Fruit, the painting is groundbreaking. While still life painting had gained momentum in northern Europe, things were a bit different in Italy. Baskets of fruit or flowers were incorporated into larger scenes, but never the main subject of an artwork. That is, until Caravaggio.

Basket of Fruit was a gift from Caravaggio’s early patron Cardinal Francesco Del Monte to Cardinal Federico Borromeo, who was a fan of Flemish painters. After having seen Caravaggio’s talent for still life painting as components of other works like his Bacchus paintings, it would have been natural to ask for a piece where the accessory became the main character. Now found in Milan, today the painting is considered the first Italian still life. 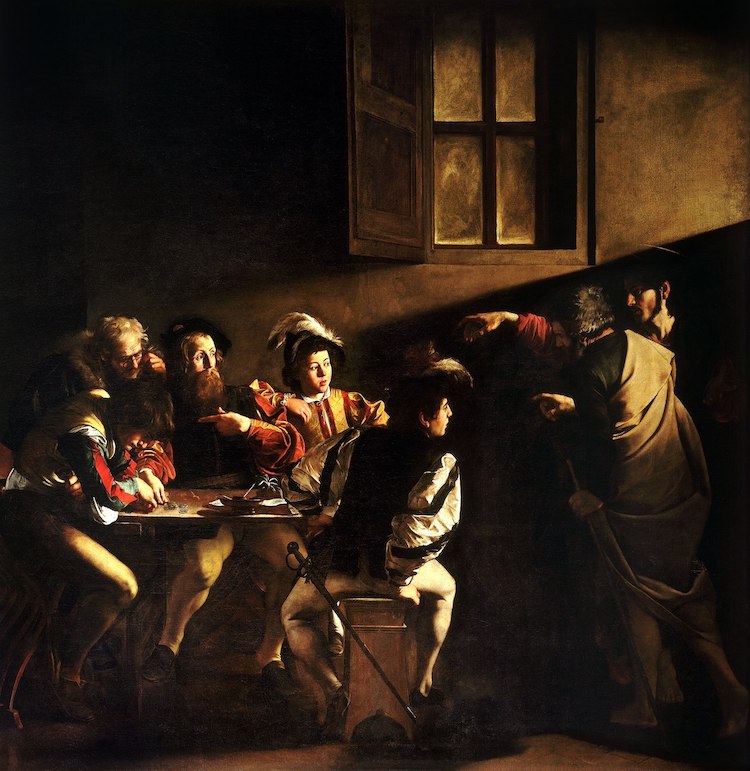 After a few years in Rome mingling in the proper circles, Caravaggio began to get important commissions in churches around the city. Never one to let institutional expectations or traditional iconography pressure him, the rebellious artist used these projects as places to experiment and show his unique point of view. The Calling of St. Matthew, which can still be found in its original location, remains one of Caravaggio’s most famous paintings. The informal, natural gathering of figures was a huge shift against the idealism of Mannerism. Dressed in contemporary clothing, the characters appear lifted from a genre scene rather than a traditional religious painting.

But the real genius of the painting comes from Caravaggio’s use of light and shadow—the trademark of his style. Following the actual architecture of the chapel and its windows, sunlight streams in and follows the hand of Christ, who points toward Matthew. The light not only creates heightened drama but acts as a metaphor for the hand of God, asking Matthew to join him. 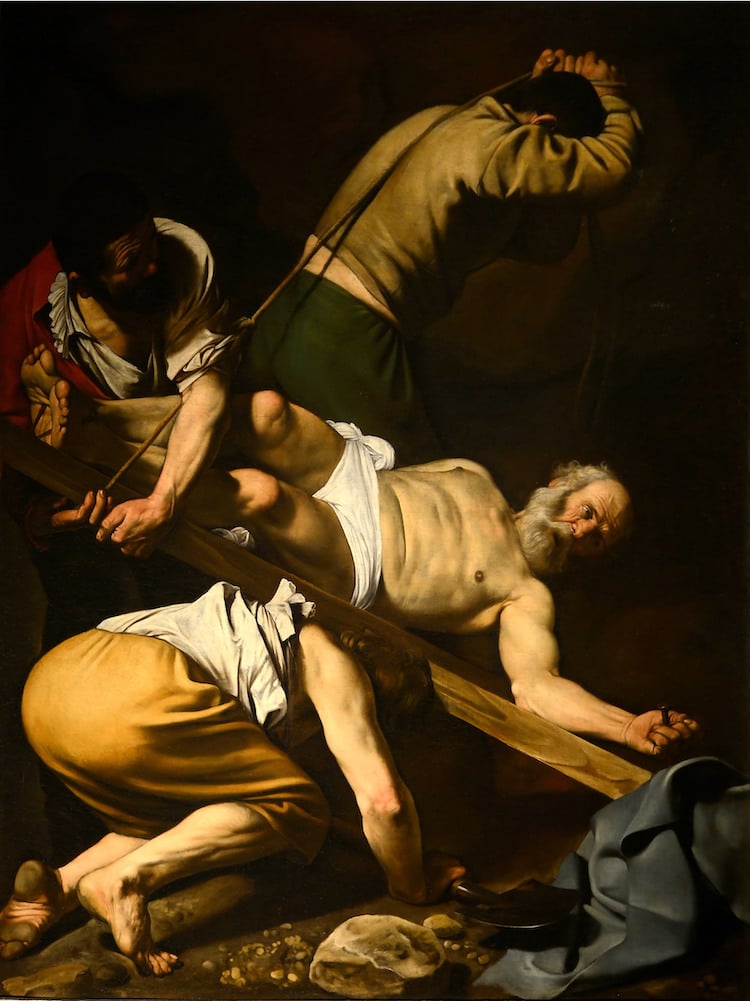 Caravaggio’s next big commission called for him to create two paintings for the same chapel. While both are still in place in the church of Santa Maria del Popolo in Rome, neither painting currently on view was the first version he painted. In fact, both paintings were first rejected by the patron, forcing Caravaggio to do them again.

Though the exact reason his Crucifixion of St. Peter was rejected is unknown, his second version is still full of bold choices. Caravaggio was known for using regular people as models, something unheard of at the time, and it was scandalous to see figures in a religious scene with such realism. Here Peter looks like an ordinary man, not a glorified saint, and one of his executioners even has dirty feet. Caravaggio put these Biblical characters on the same level as ordinary citizens, instead of elevating them on a pedestal—a bold move for the time.

Conversion on the Way to Damascus (1601) 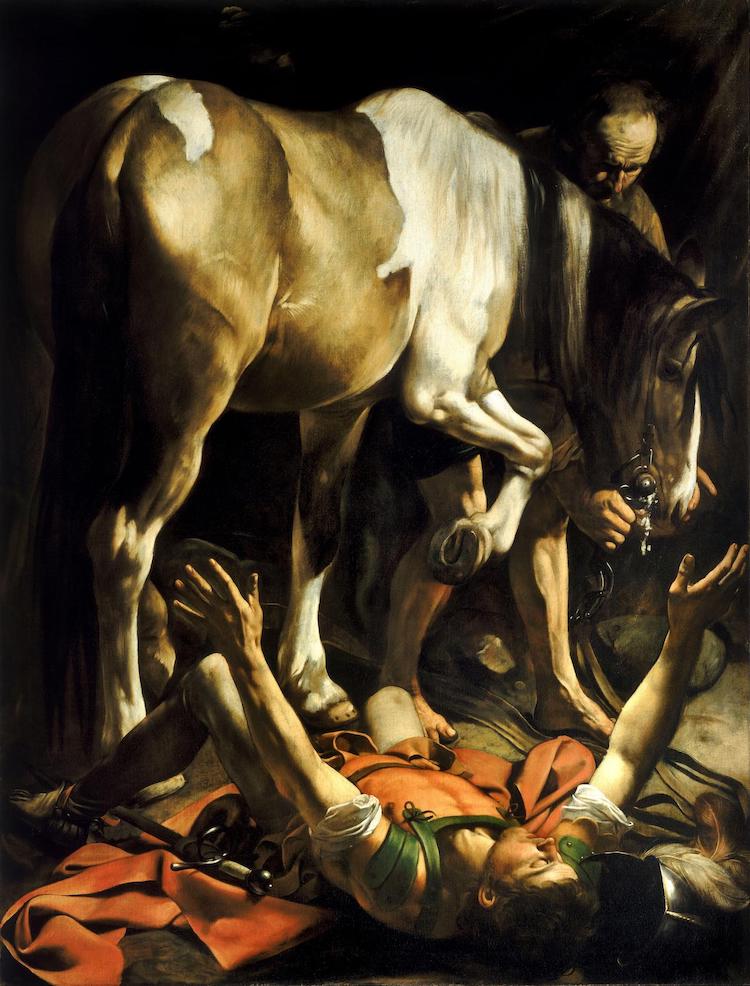 “Conversion on the Way to Damascus” by Caravaggio, 1601. (Photo: Public domain via Wikipedia)

Directly across the chapel from the Crucifixion of St. Peter is another powerful Caravaggio painting, Conversion on the Way to Damascus. Similarly, the first version of this painting was rejected—though both were purchased by avid Caravaggio collectors. The oil painting on display today shows Caravaggio’s masterful use of light, with a warm glow washing over Paul as he falls from his horse and emerges from the darkness.

The depiction once again breaks with tradition. While Renaissance and Baroque paintings of the scene typically show a horse, here Caravaggio has made the animal—and its backside—the dominant feature of the composition. It was a controversial choice that is said to have prompted this exchange between the artist and a church official: “Why have you put a horse in the middle, and Saint Paul on the ground?” “Because!” “Is the horse God?” “No, but he stands in God’s light!”. 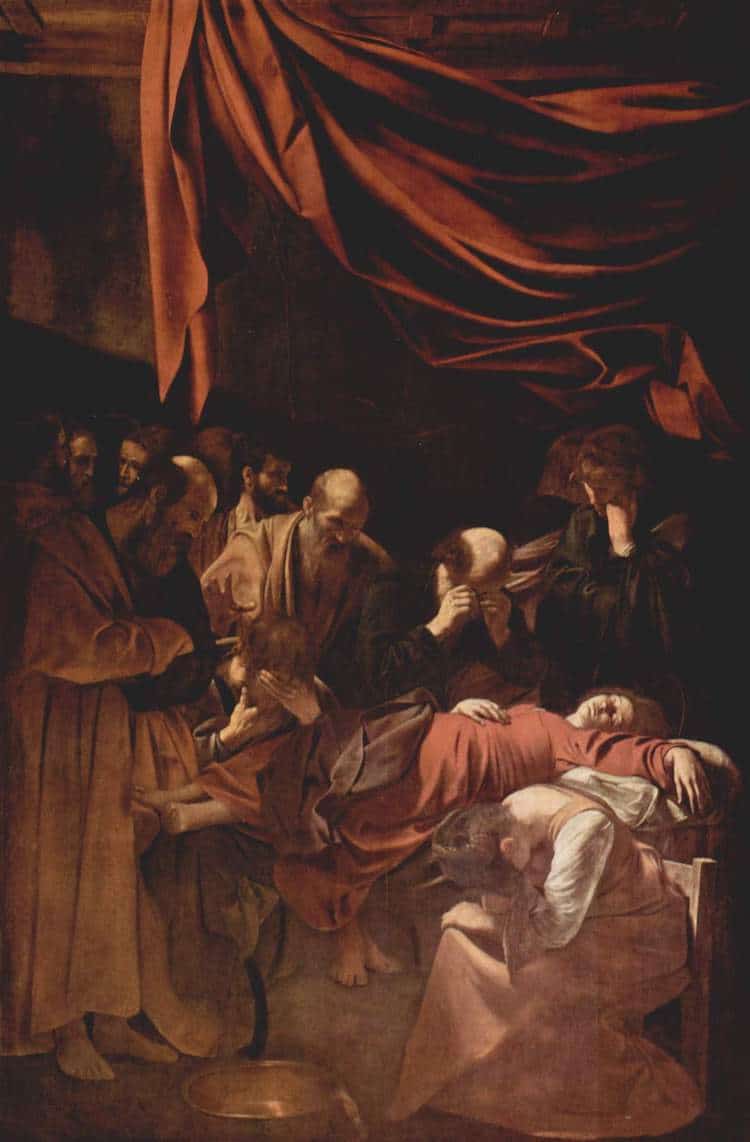 Caravaggio’s place in the Louvre was ensured by yet another rejected artwork. This time, the rebellious artist was commissioned by a papal lawyer to paint a scene showing the death of the Virgin Mary. It was to sit in his chapel in a church in Rome but was deemed inappropriate once completed. And this time we know the cause.

The painter’s use of regular people as models was well-known, but when people believed that he used a prostitute—who was possibly his mistress—as a model for the Virgin Mary, it caused a stir. Beyond that, Caravaggio’s need for uncompromising realism caused him to show the deceased as bloated and swollen. This unbecoming depiction of Christ’s mother went too far for church officials and another painter ended up making a work for the chapel. Luckily, thanks to a recommendation by fellow Baroque master Peter Paul Reubens, the Duke of Mantua purchased the painting. Following several owners, including England’s King Charles I, the Death of the Virgin entered the Louvre’s collection after the French Revolution. 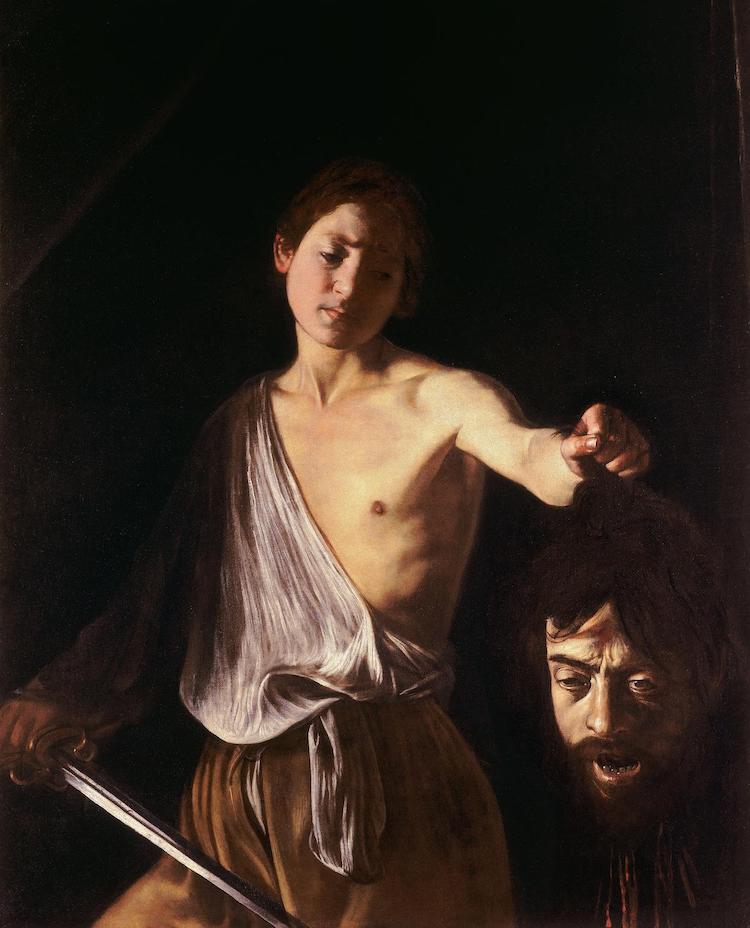 “David with the Head of Goliath” by Caravaggio, 1610. (Photo: Public domain by Wikipedia)

David with the Head of Goliath is a psychological masterpiece painted during a period when Caravaggio was exiled from Rome after murdering a man during a tennis match. Caravaggio using his characteristic tenebrism to craft an oil painting showing a young David looking pensively at the severed head of Goliath.

Here, Caravaggio uses his own features for Goliath, making it yet another morbid self-portrait. After the murder, Caravaggio was banished from Rome from 1606, spending time in Naples, Sicily, and Malta. Some believe that the painting was a gift to Cardinal Scipione Borghese, an avid art collector and a man with the power to pardon Caravaggio. Others believe that it’s simply a plea for mercy, with David’s sad gaze mirroring the pity that Caravaggio wished to receive. Whatever the case, Caravaggio was pardoned, but he was never able to return to Rome. During the trip back to his beloved home, he fell ill and died before ever setting foot back in the city.

Memento Mori: Life and Death in Western Art from Skulls to Still Life

The post 8 Caravaggio Paintings That Broke All the Rules (and Where to See Them) appeared first on My Modern Met.